Explore DHIS2 version 2.32, which includes many new features, apps, improvements, and bug fixes. On this page you can find information on this software version, including feature descriptions, links to technical documentation, and more

Watch our Feature Spotlight videos for DHIS version 2.33 here, or on our YouTube channel. 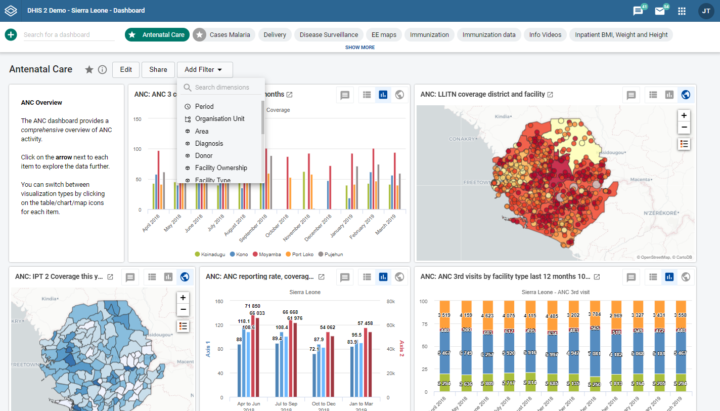 The dashboard app now provides filters which apply to entire dashboards. You can filter the dashboard content by most available dimensions. This is powerful as it combines the usefulness of filters with the ability of dashboards to see all of your most important metrics at a glance. You can click “Add filter” above the dashboard to open the list of filters. If the selected filter exists as a dimension in a dashboard item, the dimension will be replaced; otherwise the filter will be added to the dashboard item as a new filter. Try it out in the demo e.g. by selecting “Facility type” as filter. 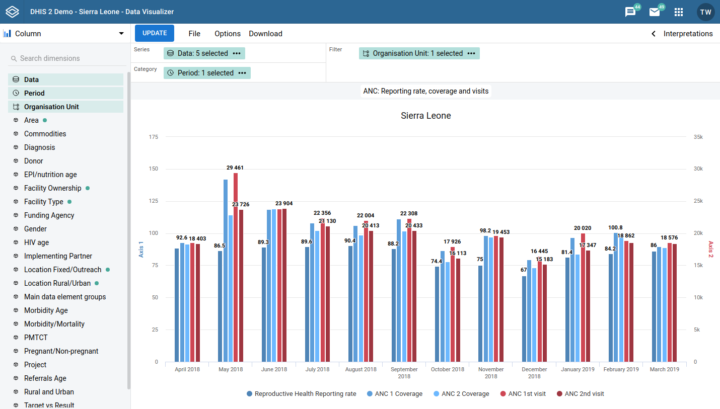 You can now build a chart with two axes. This is useful for creating charts which combine percentage indicators, like coverage rates or data set reporting rates, and data element numbers, like total number of visits. 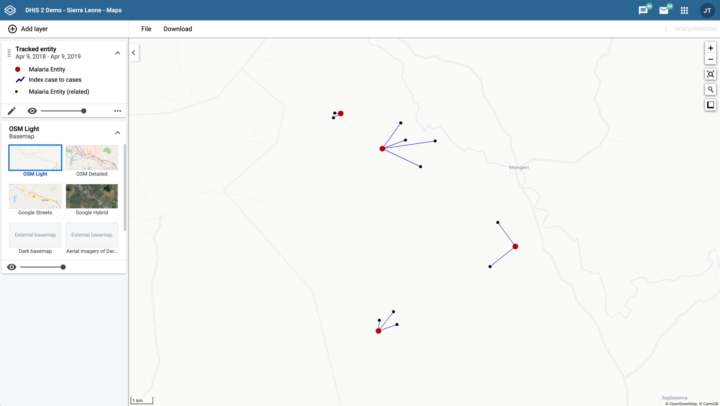 Now tracked entity instances and their relationships can be shown in the maps application. This is a useful feature, for example, to display relationships between an index case of malaria and the corresponding introduced cases. 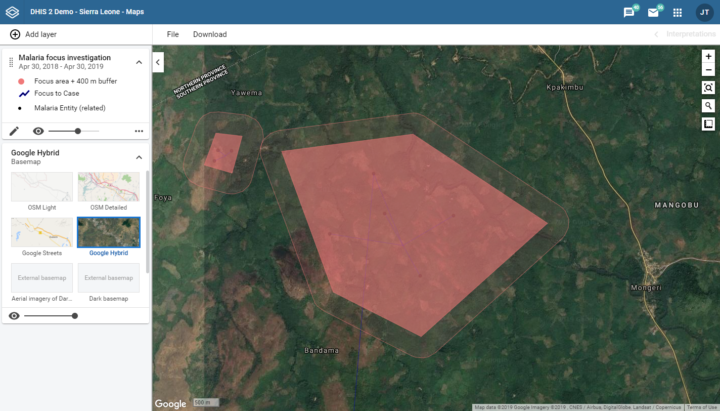 The maps application can now show event polygons or shapes. Buffers can also be applied to the event polygons. This is very useful with defining a focus or investigation area and associating it with other tracked entity instances such as Malaria cases, for example. 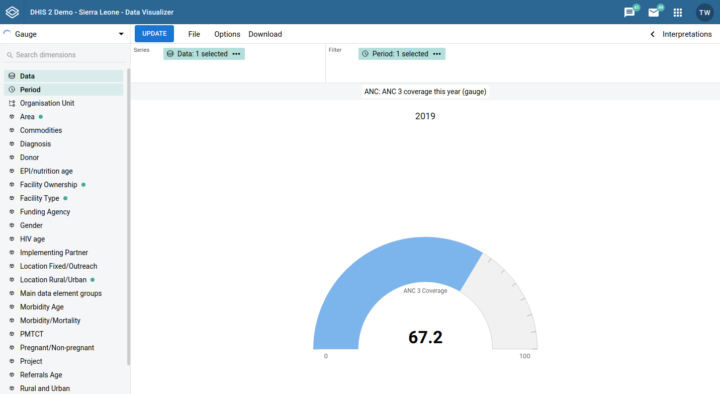 The gauge and pie chart layout now offer only series and filter available for selection. Category has been removed because it was not applicable in order to build these charts. 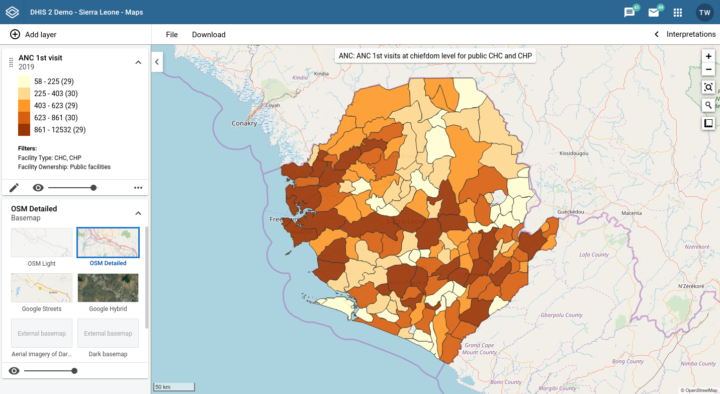 The maps app now allows you to specify any number of filters. This allows for a more focused analysis and makes the maps app equally flexible as the visualizer and pivot apps in this regard. 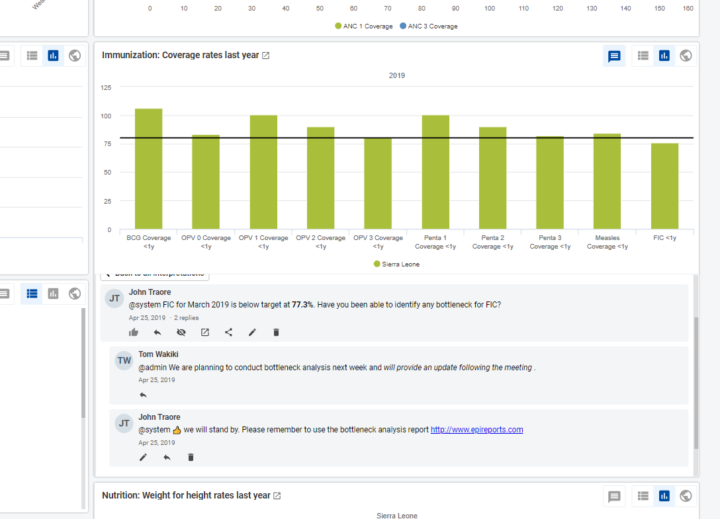 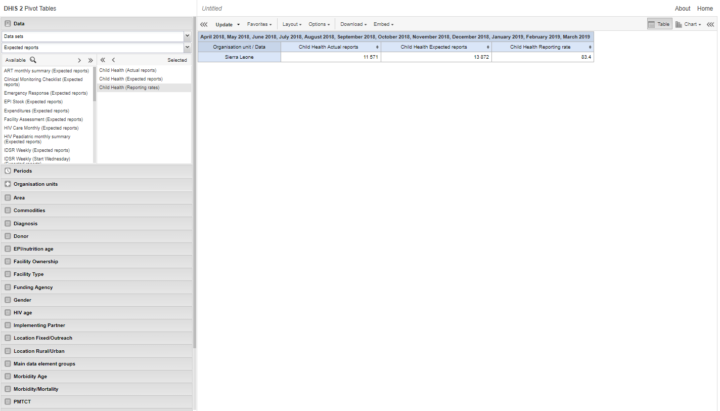 This version offers a dramatic performance improvement for users that have dashboards with many items through progressive dashboard loading. This means the items which are visible in the viewport are loaded first, and then other items are loaded progressively as the user scrolls down the dashboard page.

To improve performance of analytics request while at the same time ensuring security, a server-side cache for analytics requests have been added. This is helpful as the cached results are served behind the authentication and security layer of DHIS 2. You can enable it and specify the cache expiration time in seconds by adding a analytics.cache.expiration property to dhis.conf.

18 bugs and issues related to analytics have been fixed in this release. This includes proper totals in pivot tables, proper aggregation of financial year data over time, no restriction on the number of options when searching for options in event reports, “open chart as map” in data visualizer, better performance when suggesting users to mentions in pivot tables. 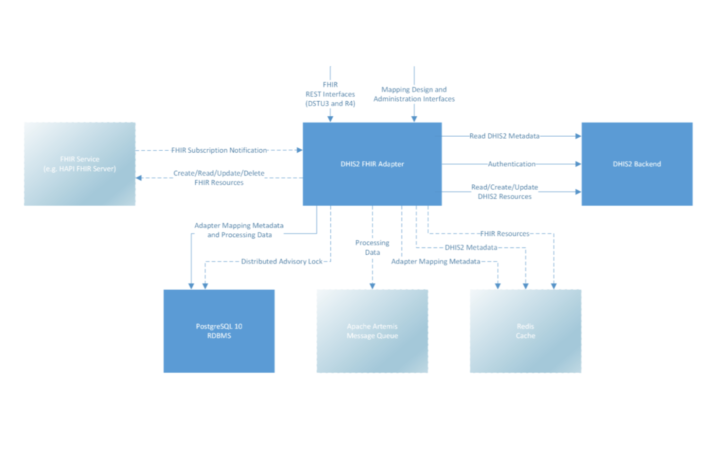 The DHIS2 FHIR Adaptor was created to enable the import and export of clinical data using a rule engine that transforms patient-related clinical data from questionnaire-like structures (i.e. DHIS2 Tracker Programs and their Program Stages). It is optimized for national FHIR profiles that are based on standard coding systems like LOINC, SNOMED CT, CVX or even national coding systems.

Program Stages can be configured to allow assignment to users, meaning that an event can be assigned to an individual. The assigned user will appear in the form in Tracker Capture. 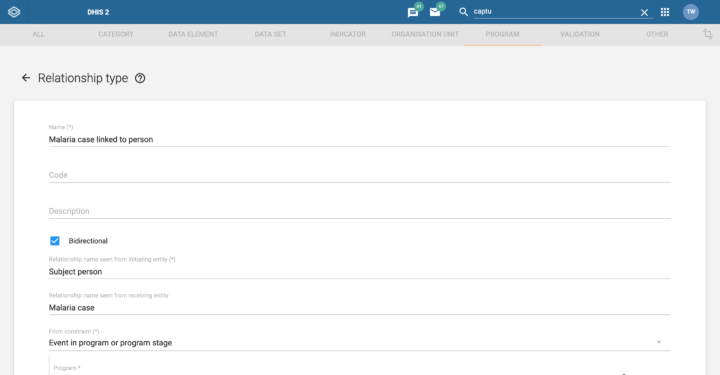 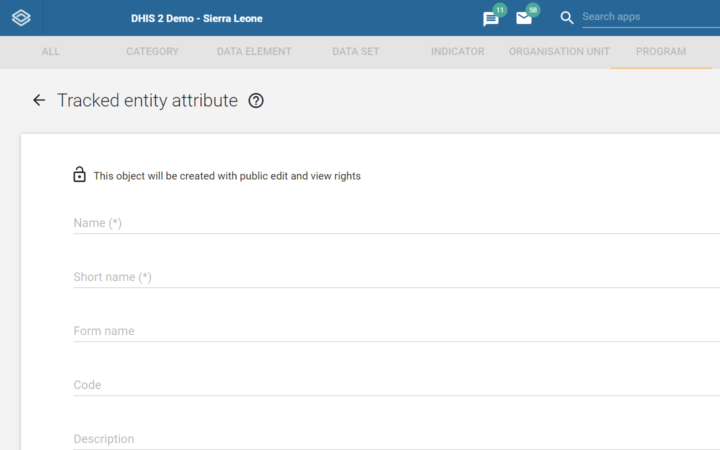 You can now assign a form name to tracked entity attributes. The form name, similar to data elements, will be visualized in your data entry form in tracker capture, the new Capture App, and the Android App. 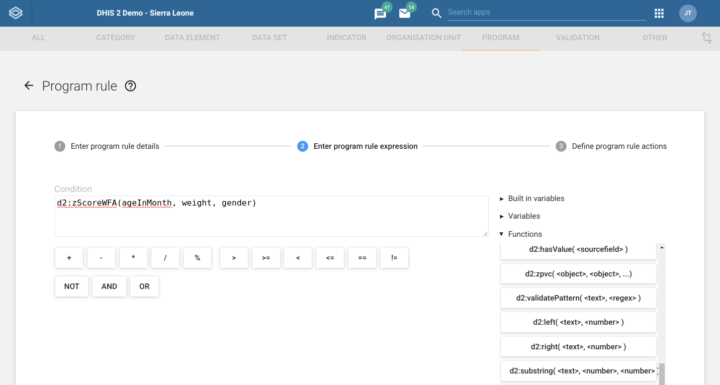 Using program rules, it is now possible to calculate z-score based on data provided by WHO weight-for-age indicators, using the function d2:zScoreWFA. The zScore can be automatically assigned to a field in the form or shown for reference with a program rule action that displays information to the user. The z-Score calculation is supported on all clients and for server side program rules. 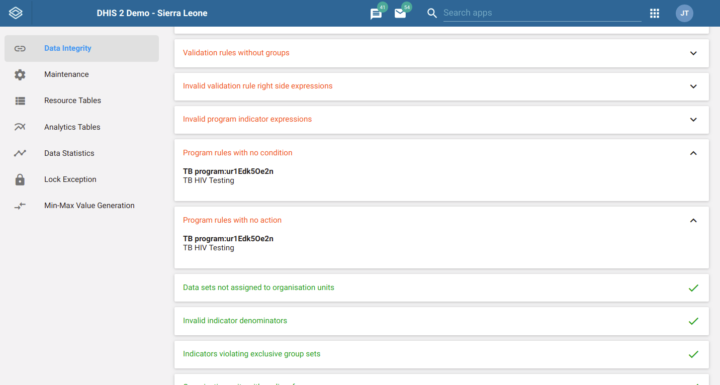 21 tracker-related bugs and performance issues were addressed in this release. This includes significant improvements to API calls; program indicators and rules; relationship handling; and messaging. 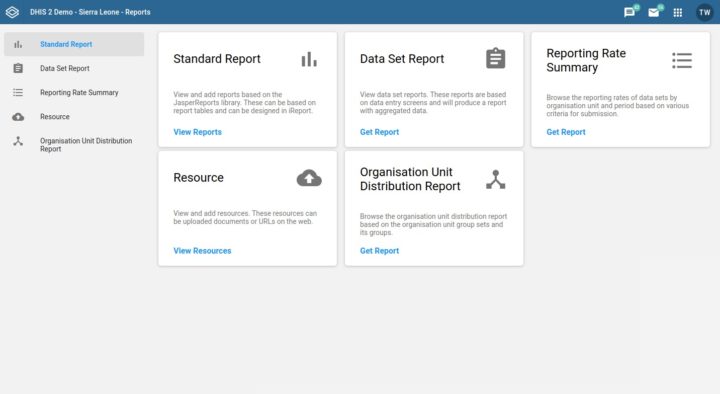 A new reports app has been created with modern web technologies to improve the user experience. This app is in beta. A new approval app is planned for 2.33 which will replace the current approval UI found in the previous reports app. As this app is in Beta, it exists alongside the existing app. If you wish to try it out, be sure to include the new app Reports app (Beta) in the list of apps accessible for the users/roles. You can remove access to the old Report app, but you will need to keep access if you need to make use of the data approval feature. 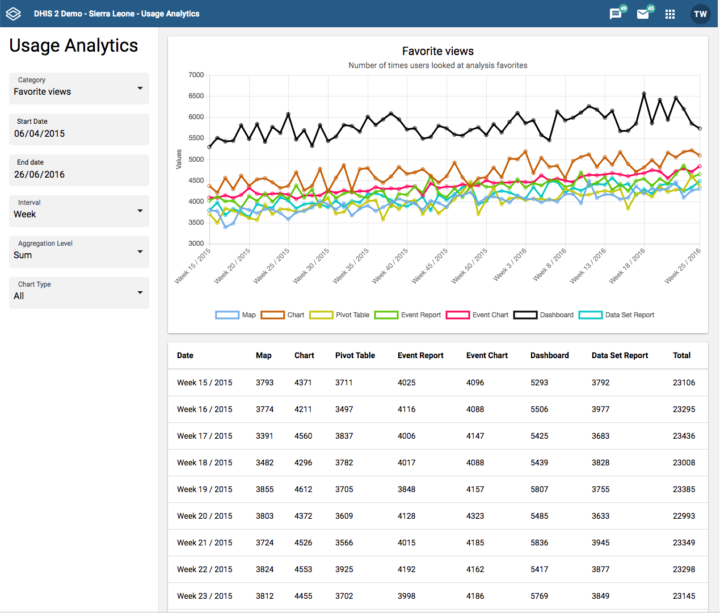 The usage analytics app has had a make-over to bring it inline with the modern application style of DHIS2. 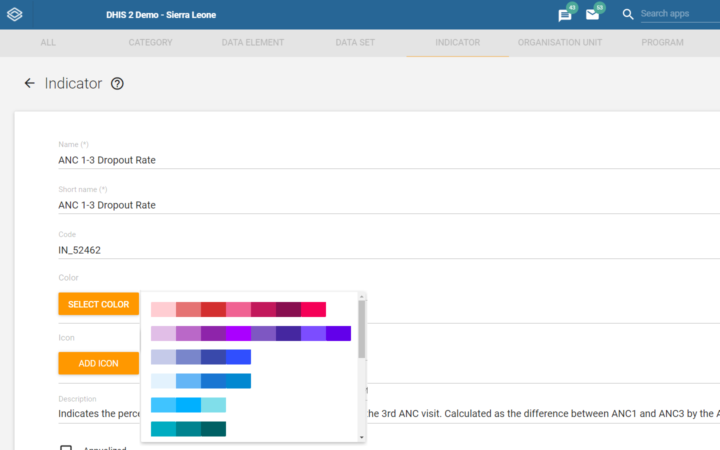 You can now make use of colors, icons and other customization options to optimize the look and feel of your programs in Tracker Capture and Capture app. 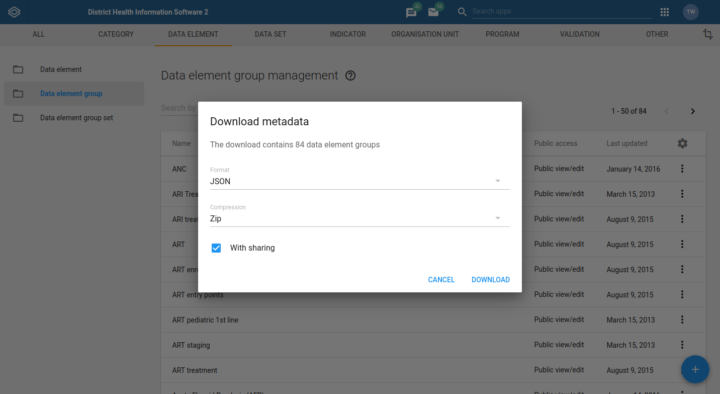 The maintenance app now lets you download the current selection of object lists as JSON, XML and CSV. You can decide to download the content compressed or uncompressed, and with or without metadata sharing info. Click on the “gear” icon in the top-right corner of the maintenance object list page and select “Download” to try it out. 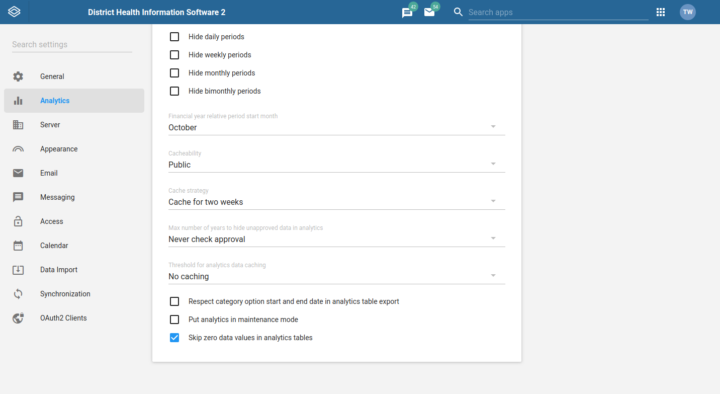 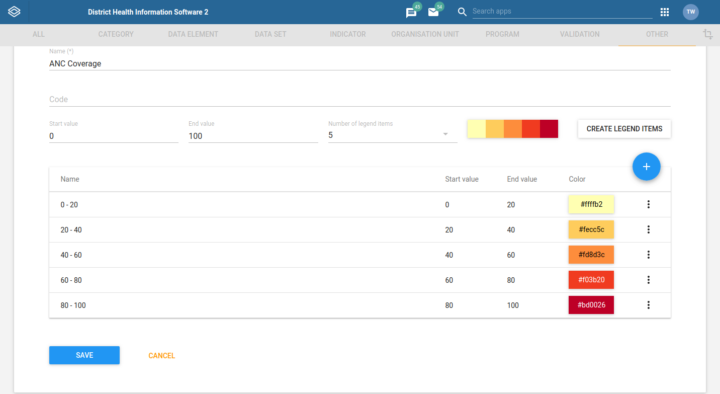 Several issues with the “edit legend set” screen in the maintenance app have been fixed, and legend items are now sorted ascending by start and end value, the auto-generate legend items work properly and legends can be saved successfully. 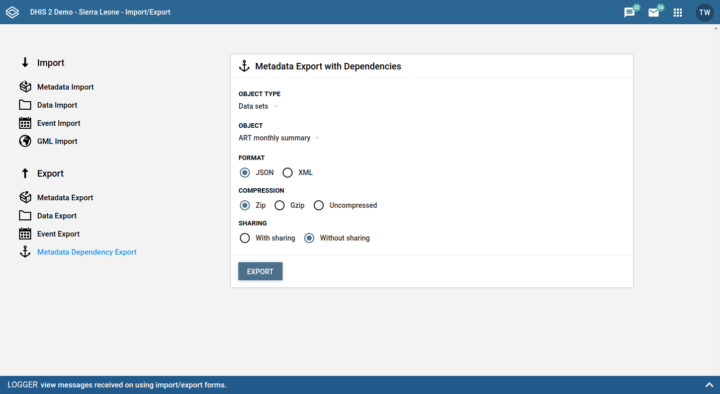 In the “metadata dependency export” section in the import-export app there is now an option for skipping sharing information as part of the export payload.

API for line-listing of enrollments

A new API is added for line listing enrollments at /analytics/enrollments/query. The new endpoint makes it possible to retrieve data from several program stages for each enrollment, and produces one line per enrollment. This is useful when exporting enrollment data for use in other software, or when producing reports that span more than one program stage. When line-listing an enrollment that contains repeatable program stages, the event with the latest event date is used.

A new setting for the data value set import API is available for skipping the generation of audit values is now available. This is useful for very large imports and for data integration jobs where greater performance and reduced database size is a good trade-off for auditability. Enable it by specifying the skipAudit=true query parameter.

Click on the links in the table below for more information about this software release and to access an interactive demo.