The DHIS2 Academy program has operated since 2011, providing in-person regional training courses focused on building capacity in Ministries of Health and other organizations to implement, maintain, and use DHIS2 systems, and helping to grow regional networks of DHIS2 users and experts. While the DHIS2 Online Academy has offered self-paced courses on DHIS2 Fundamentals since 2017, all Level 1 and Level 2 Academies were carried out in person with the support of regional HISP groups, members of the Health Information System Programme (HISP) at the University of Oslo (UiO), and experts from the global DHIS2 community. This changed suddenly in early 2020 with the global spread of the COVID-19 pandemic, when travel restrictions and infection prevention measures made organizing large, in-person courses impossible.

The HISP network has years of experience adapting to new challenges and adopting technological solutions. Recognizing that COVID-19 had generated an urgent need for DHIS2 training — as 37 countries adopted DHIS2 for COVID-19 response — at the same time as it prevented us from carrying out training using traditional methods, the HISP network came together to launch digital versions of DHIS2 Level 1 and Level 2 Academies and in-country training, with live facilitation by DHIS2 experts via digital platforms.

Since 2011, HISP Tanzania has worked with other regional HISP groups in East Africa to host regional DHIS2 Level 1 Academies, and had responsibility for maintaining and updating course material for the Design & Customization course that was delivered by other HISP groups worldwide. HISP Tanzania had proposed an update to this course in late 2019, based on feedback from students, to bring together concepts of DHIS2 design with their related analytics outputs. A pilot version of a newly redesigned course, Design for Analytics was planned for mid-2020. When the HISP network met in March 2020 to decide how to deliver training during the pandemic, it was decided that HISP Tanzania should go forward with this pilot course in an online format. It was also agreed that registration in this course — and all other DHIS2 Academies — would be offered at no cost to participants, to make it easier for Ministries of Health to meet their critical needs for DHIS2 capacity building. 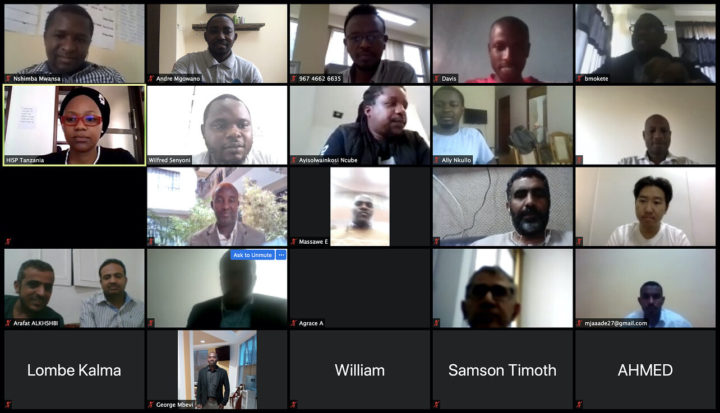 The Design for Analytics Academy focused on DHIS2 design principles and customizing the system for information use, helping participants learn how DHIS2 as a platform can be used not just as a data management and monitoring tool, but also as a platform to support planning and decision making through analytics tools such as data visualization and dashboards. The digital Academy was composed of a series of three-hour sessions over the course of ten consecutive workdays, including live facilitation sessions, Q&A, exercises, feedback and examination. Limiting sessions to three hours per day allowed participants from Ministries of Health, local government authorities, NGOs, and other public and private organizations to keep pace with the intensive Academy program alongside their routine office schedules.

The HISP Tanzania team decided to use live sessions via a video conferencing platform to try to keep the experience as close to an onsite Academy as possible. While this approach was prone to connectivity and sound challenges, it did allow participants to be more engaged in the sessions, leading to a more interactive experience between facilitators and participants than using pre-recorded videos would have. HISP Tanzania worked with HISP-UiO to employ a variety of online platforms in this course, including the DHIS2 Online Academy for course material, exercises and assignment, Zoom for live sessions, and the DHIS2 Community of Practice for discussion and questions.

On the last day of the Academy, participants took a final exam to test their newly acquired DHIS2 knowledge. The 94% pass rate demonstrated that the online format and delivery had been a success. Not only were participants able to access and use the online training tools, but they had also learned the material effectively, building their skills for designing and customizing their own DHIS2 systems. One participant noted that the academy helped him “learn a lot of new knowledge to help make a change back in (his) community.”

The live online format of the Design for Analytics Academy did present some challenges–in addition to occasional connectivity issues, HISP Tanzania found that 14% of the participants had never taken an online training before, so they needed to provide a thorough orientation on how to use the tools (the team had thankfully anticipated this, and a thorough orientation was already part of the course agenda). However, there were also several benefits from running the course virtually. One of these is increased geographic diversity: freed from logistical constraints and costs, it was now possible for participants from many different regions to join. In addition to giving the DHIS2 users from different countries more opportunities to take part in training courses, this also helped them make connections between DHIS2 experts from other regions, which helps to strengthen the global DHIS2 community.

A second benefit was that using video conferencing tools made it easy to record live training sessions. All the recordings from this course — and all the digital DHIS2 Academies — were uploaded to the DHIS2 YouTube channel, where they are publicly available as a resource to both the participants of this DHIS2 Academy, and any others who want to review the material. Making these recordings available on the same day as the sessions were delivered also made it easier for participants from other time zones to follow along with the course as it was being carried out.

HISP Tanzania reports that their experience hosting the DHIS2 Design for Analytics Academy, along with positive feedback from the students, has convinced them that digital Academies are an effective and innovative way to provide DHIS2 training, both for Level 1 and Level 2 courses. The DHIS2 training team at HISP-UiO continues to work with the HISP groups to find way to make the learning experience even better in the future, and we appreciate the work of HISP Tanzania and the rest of the HISP network in helping the community pivot to online learning in response to the COVID-19 crisis.

Read the full report from HISP Tanzania on their experience leading the digital Design for Analytics Academy on the DHIS2 Community of Practice.